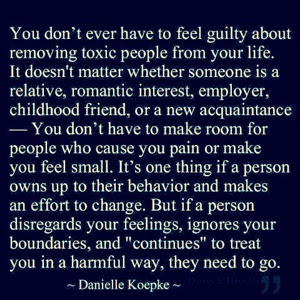 Never feel guilt about removing TOXIC people from your life.
It doesn't matter if that person is a blood relative, childhood friend, romantic partner, the mother/father of your children, a parent, a co-worker, or anyone who you at some point in your life were “close” to.
—You do not have to keep people in your life that cause you pain, make you feel inferior, lie to you, and belittle you.
It is one thing if a person owns up to their  behavior and takes responsibilty for the things they have done, then they make a conscious and genuine effort to change. But if a person disregards your feelings over and over again, takes advantage of you, and uses you for their own selfish reasons, you must remove them from your life. These types of people will not leave willingly. They see any kindness on your part as weakness. They prey on those who they see weak. They ignore your request, they violate your boundaries and they are relentless in tearing you apart.
Remove these individuals - they will never change. They don't want help. They can't be cured, nor do they want to. They are toxic, infectious parasites. They will suck the life out of you, if you let them.
Posted by Sociopaths and Their Path of Destruction at 7:16 AM No comments:

The impact of the sociopath 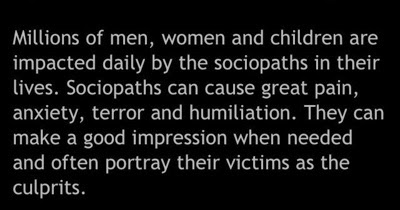 Millions of people are impacted by a sociopath or sociopaths. They cause so much damage, one wonders if the damage really ever heals. Does the anxiety ever really go away - even after the sociopath is gone? Do you ever learn to trust again.
You can. And you will. It will take time. Time heals. It will take strength on your part, to let go and release all the pain and fear. You have to relearn how to love, and how you deserve to be love. You are worthy of unconditional love. The sociopath takes a lot from us. But they cannot take our spirit or our soul.
Keep your head up.
Posted by Sociopaths and Their Path of Destruction at 7:00 PM No comments:

Sociopaths are Not Human

Sociopaths may look human like us. They have a body like us, they have faces like us, but they are not like us.  I believe being human means to have the higher intelligence than that of a primal animal. Being human means to have a conscious, and feel empathy for our fellow man. Love is part of being human.
Since sociopaths lack a conscience and are incapable of demonstrating and feeling real empathy or remorse, it is hard to classify them in the same category as us.
Sociopaths are primitive, like wild animals  and act on primitive survival skills like wild animals. Sociopaths seem to be more of like reptilian snakes than humans. We know snakes and wolves kill to survive. Wild animals such as lions kill to provide to food for their young and their families. The sociopath destroys others, not for the anyone but themselves. They do it out of pure hatred and spite.

So it's seems like the sociopath is less evolved than a wild animal on an emotional basis.

In order to convince us that they are like us, they watch others. They even do research on emotions. A sociopath I know has a notebook, writing down certain emotions to feel if this or that was to happen. Creepy...

The sociopath needs to know how to appropriately act and what emotion to use, or we may see through them. So they have perfected their lying, and manipulation. These are these are their  survival skills. Every life they have destroyed, they learn a little more about empathetic humans, and how to get what they want from them. They go through life using one person after the next. Destroying one life after another. And they never feel an ounce of remorse for it. They literally never feel any guilt or remorse. They rarely say sorry, but if they do they are not sorry because of what they did. They are sorry that they got caught for it.

So we know sociopath’s look human, but I do not want to be in the same human classification as a sociopath. They do not possess enough emotional human qualities to be called human beings.

Humans possess a light within. A soul. I am not sure if a sociopath has a soul. I believe they possess more a an entity within. Meaning when they die they do not go to the afterlife, they simply turn to dust. Souls live on forever. They sociopath does not.

Sociopaths do show emotion, in order to manipulate us into believing they are capable of having emotion.

When first meeting a sociopath we are unsuspecting (unless we have been targeted by one before) The reason we are so attracted to the sociopath is because they are mimicking us, they are pretending to be like us. So we feel we have a connection with them, because we have so much in common. They pretend to be someone who has the same interest we do.

As humans that emcompass a heart and soul, we have a hard time hiding our emotions. That is a characteristic of being human that the sociopath must be able to mimic. And they do it quiet well. Their entire life is hiding who they really are from the world. They never experience a truly joyful life. They just keep lying and pretending and destroying until they finally die 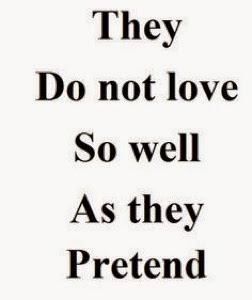 Posted by Sociopaths and Their Path of Destruction at 5:55 AM 4 comments: