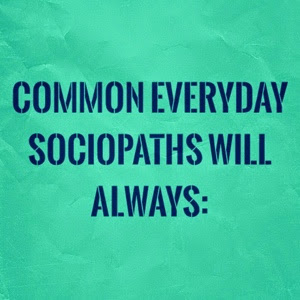 The common everyday sociopath is
ia convincing, excelled liar and when called to account, will make up anything to fit their needs at that moment.
The sociopath is a jealous individual, and will target and destroy any person they feel envy toward. They destroy by spreading lies to damage the persons reputation. The lies are completely made up, and have no truth to them. The sociopath is Very convincing...

Spciopaths will never take responsibility for anything. Nobody likes to be blamed, but a responsible person will accept blame for something appropriate. Sociopaths don’t like to accept blame for anything, even if it is well-earned. While part of this is likely from their typical “I am  better than you” attitude and “the rules don’t apply to me” attitudes, there’s more to it than that -  Sociopaths may realize that blaming is how they control others to cause harm and problems for their targets, whom they viciously attack, often family members or former love interests. They understand both the destructive and defensive powers of blaming and make regular use of both.

I have been targeted by a sociopath who spread Nasty lies about me. The lies were so damaging I was afraid to leave my home because I was scared that people believed the sociopath.
Posted by Sociopaths and Their Path of Destruction at 5:15 AM