Revenge and Slander - How A Sociopath will Silence You. 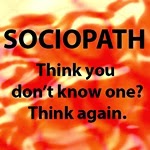 Anyone who has been a target of a sociopath knows the evil they are capable of. We know that a sociopath may not murder your physical body, but they will slaughter you mentally, emotionally, and spiritually. They will wear your down with their relentless tactics of manipulation, and lies.  They basically mind fuck you - where you end up feeling like you are the "crazy one".

Some people have no idea what a sociopath is.  They think "Ted Bundy", "Charles Manson", and "Wayne Gacy". Which those sickos were all sociopaths/psychopaths. They are just the worst kind. Sadistic sexual sociopaths. And most sociopaths are sadistic, and are sexually aggressive (even the female sociopath). Some are just not obsessed with killing as much as others, and are able to control their sick urges.  But ALL sociopaths wreak havoc on the lives of others, they are all pathological liars, they are all con-artist, they all lack remorse for the pain and suffering they cause. They are ruthless, conscienceless, calculating, incapable of love, and filled with rage and hate.

Those of us who have been a target of a sociopath, and recognize them for the twisted person they are, we know that sociopaths are not the confident assholes they pretend to be. Again it
is one of the many mask they wear. But they are actually insecure, pathetic, and jealous people. They are jealous of things they see a "friend" has, that they do not have. They feel they deserve to have that as well.  And once they decide they want something, they will do whatever they have to in order to get whatever it is they desire, even if they have to steal, lie, or destroy the person who has what they want.

Sociopaths do not want the truth about them to be known, that they are insecure, malicious, and devious people.
Sociopaths have a deathly fear of being exposed and rejected. That’s why they compulsively LIE, even if the truth would be more beneficial, their brain is hard wired to LIE.

If people were to find out how evil, corrupt, and sinister the sociopath actually is. How would they be able to manipulate people to do what they want? If others were to know about their true nature, they would lose the support of all the people they have managed to brain wash, elicit pity from, and the people who believe their sad story.

Therefore when a sociopath feels someone is a threat to them, or may be aware of what they are, and could possibly expose them. That is when the sociopath will have a strong motivation to attack the
person, discredit them by any means necessary, harass, and ruin whoever presents arguments and facts that might tend to raise questions and doubts about the sociopaths behaviors and their false
statements.

They use blaming to control others, in order to harm the targets they viciously attack, often it is their own family members or former love interests.
Sociopaths will seek revenge relentlessly and engage in distortion campaigns (smear campaigns)  to control and manipulate others into having false beliefs about the victim. By the time the victim of the smear campaign is aware of it, it is too late and he or she may have already been trashed and their name drug through the mud, and their character has already been completely assassinated and lied about for several months, even years to the point that anything he or she says or does will somehow be interpreted as evidence of them (the victim) being the problem. When in reality the victim has done nothing. TO KNOW WHO IS THE VICTIM, AND WHO IS THE SOCIOPATH, LISTEN TO WHO SEEMS TO HAVE THE STORY THAT IS ELICITING PITY AND SYMPATHY FROM OTHERS - that is your sociopath... They will even act as if they care about the person they
are claiming to be " unstable and crazy".
If You ARE THE TARGET OF A SINISTER SOCIOPATH, THAT IS TRYING TO
DESTROY YOUR REPUTATION and cast you as irrational or downright crazy.  BE
STRONG. KNOW THE MONSTER YOU ARE DEALING WITH, AND REMEMBER YOU ARE NOT THE CRAZY ONE. NO MATTER how bad the sociopath has portrayed you, or the lies they are spreading.
You know who you are.
YOU don't know who the sociopath is, AND YOU DO NOT WANT TO!
IF you WERE to FIND out ALL THE SCHEMES, CRIMES and DEVIANT ACTS they are doing it would PUT YOUR LIFE IN DANGER! If the sociopath were to think you knew about all their scams, they would do more than slander your name, in order to keep you from talking. THEY WOULD SILENCE YOU FOREVER!
Remember that all sociopaths are dangerous. They have no conscience guilt or remorse. They don't feel bad for anyone.  They don't feel shame for the heinous acts that they commit. Never underestimate the sociopath. They blend in just like you and me. The blonde, smiling soccer mom sitting next to you could be a sociopath.
Females even more so than their male counterparts are less likely to be thought of as something
so evil as the sociopath, making them even more dangerous. They can cause even more damage
than the male, because of the way most people view women, which is as care takers nurturers, mothers, wives, and humane. But
the female sociopath is far from it.


Posted by Sociopaths and Their Path of Destruction at 6:33 AM