Marrying a psychopath, and how they portray you as the unstable perpetrator.

Sociopath, narcissist, psychopath... Whatever you want to call one. They have one similar quality..

They have NO remorse.

They are capable of causing horrific pain and suffering. (mentally and physically)  They simply could care less about the damage they cause. When normal people cause pain others pain, it is usually under the circumstance of being hurt, afraid or simply not having the tools to handle confrontation and pain appropriately. The difference in normal and psychopathic is; Normal individuals feel remorse for what they have done to hurt a person. The guilt will affect them so much, they have a hard time living a happy life. Psychopaths are able to keep thriving, the pain they know they have caused someone, doesn't bother them. They probably won't ever think about it again, unless the person they caused the pain to, expresses that they are hurt. This doesn't evoke guilt in the psychopath. Instead it evokes ANGER, irritation, and then the psychopath continues to cause more hurt, and damage.
Psychopaths intentionally hurt others, without ever feeling any guilt.

In fact, “guilt” is a foreign emotion to the psychopath. They do not know what guilt feels like because they have never felt it. Yet ‘guilt’ is used often by the psychopath to manipulate others.
They are often able to get people to do what they want, by making the person feel guilty.

People who marry psychopaths, do not marry them knowing they are psychopathic. They were lied to and manipulated to believe the person was genuine and caring. But the person soon learns that person they married is not a good person. Some people will live in deniall, because accepting that you have married a monster is a hard pill to swallow. The marriage never last, but the abuse and trauma from the marriage does..
The psychopath becomes bored with their spouse/victim, because they have nothing more to offer the psychopath. So the psychopath simply moves on to their next victim, of course not before slandering, spreading lies, and accusing the victim of horrific acts against them. They do this to protect themselves against what the victim may say about the relationship. By bashing the victim first (before the relationship is even over) the psychopath is making sure their 'story' is heard before the victims.
This makes the victims story look false.

After all the psychopath has already warned others that their soon to be ex, would probably try to accuse them of abuse or cheating, to simply get revenge because they didn't want to be in a relationship with such a unstable person who has deep mental problems. 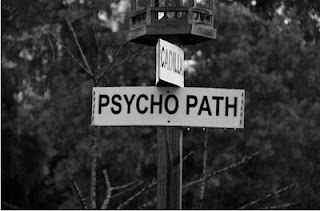 Posted by Sociopaths and Their Path of Destruction at 5:41 AM