How the Female Narcissist Operates

The female narcissist is jealous of you.  She is jealous of who you are and what you have. She is jealous of other females. She does not have many female friends because it's difficult for her to maintain female friendships because her jealously comes out and most women do not want to keep that kind of friend in their circle. If you invited her into your circle, when you did not know what kind of female you were dealing with, she may have already started triangulation within your circle. Telling one person this, and another person else. Then turning those people against each other so that they do not speak. If they were to speak with one another - her lies would be exposed.  So always communicate in a group setting with any problems that are arising.

You think your problems with the high school petty drama, were over in high school, right? Wrong, if a female narcissist has entered your life.
A female narcissist will bring all that drama in, she always has and always will. She is not capable of having normal relationships with other females. Just like she can't be in a normal and healthy relationship with men.

If you have caught on to her behavior, and she is unable to continue to manipulate and control the situation or you. She will attempt to control you another way. That is usually by controlling how others view you.  She will control you behind the scenes. By turning your fiends and others against you with lies. She will spread lies about you to your work. She will attempt to destroy you in the most covert way. After all she cannot allow you to possibly expose her for the evil manipulative human she is. She was prepared for this to happen long before you were. So the lies she began telling about you began long you became suspicious of her.  She was prepared to get revenge on you before things began to fall apart.

She does so many manipulative, calculated, and underhanded things, the victims find themselves on the defense. Under normal circumstances, you wouldn’t feel insecure or like people were turning against you. But because your ex has etched it into your brain that you are at fault. You have begun to question everything about yourself.
Don't question yourself. Go with your first instinct, trust your intuition. If you think this disordered soulless person is doing these awful things to you (even you have no proof) - they probably are!

Either way, the desired result is that you feel anxious, suspicious, and insecure about every little thing. You may even begin to feel guilty about your jealous thoughts and doubtful of your ability to act “normal”.  When and if you do confront the Narcissist/sociopath about your suspicions, she'll call you delusional or needy or bi-polar.

She will never admit to anything at all. She is able to look at you in the eyes with no emotion and claim she doesn’t have the slightest clue what you’re talking about… 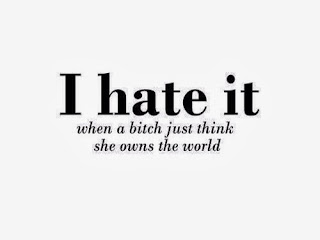 Posted by Sociopaths and Their Path of Destruction at 7:19 AM