Sociopaths and the Dark Tetrads 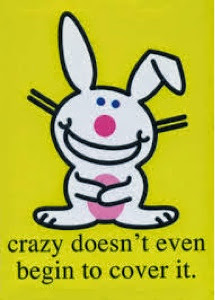 The book "Mask of Sanity" by Hervey M Cleckley, title says it all. Sociopaths and psychopaths wear a “mask of sanity”. With the mask on they look completely sane, and normal. But once the mask if removed, underneath there is a person who is psychotic, evil, deceptive, and basically criminally insane.
Everywhere a sociopath goes, they leave a trail of destructive behind them. They are home wreckers, theives, liars, cheaters, and trolls. They are desperate people, always in search of their next "victim".  They cause harm in ever way to their victim. One way they hide behind their mask and wreak chaos and havoc in others, is by using modern technology. With the internet, they have a fake persona (one they can make up or impersonate) to deceive, lie and slander whoever they want. Their goal when slandering and spreading lies and rumors is to attempt to ruin the reputation of their victim. They want their target to "react". Once the target reacts, the sociopath plays victim. As if they have no clue why a person is saying these things about them online. So once a person reacts, they have played right into the sociopaths trap.
Information found on www.slate.com -
Erin Buckels of the University of Manitoba and two colleagues, sought to directly investigate whether people who engage in trolling are characterized by personality traits that fall in the so-called Dark Tetrad:
Machiavellianism willingness to manipulate and deceive others
Narcissism egotism and self-obsession
Psychopathy the lack of remorse and empathy and sadism – pleasure in the suffering of others.
It is hard to overplay the results: The study found correlations, sometimes quite significant, between these traits and trolling behavior.
Erin Buckles found that simply asking survey participants what they “enjoyed doing most” when on online comment sites, offering five options: “debating issues that are important to you,” “chatting with others,” “making new friends,” “trolling others,” and “other.” The different responses about these Internet commenting preferences matched up with responses to questions designed to identify Dark Tetrad traits: and the results found a relationship between all Dark Tetrad traits (except for narcissism) and the overall time that an individual spent, per day, commenting on the Internet.
Here’s how different responses about these Internet commenting preferences matched up with responses to questions designed to identify Dark Tetrad traits: 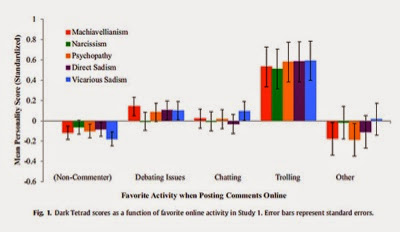 Only 5.6 % of survey respondents actually specified that they enjoyed “trolling” By contrast, 41.3 % of Internet users were “non-commenters”, meaning they didn’t like engaging online at all. So trolls are, as has often been suspected, a minority of online commenters, and an even smaller minority of overall Internet users.
The researchers conducted multiple studies, using samples from Amazon’s Mechanical Turk but also of college students, to try to understand why the act of trolling seems to attract this type of personality. They even constructed their own survey instrument, which they dubbed the Global Assessment of Internet Trolling, or GAIT, containing the following items:

• I have sent people to shock websites for the lulz.

• I like to troll people in forums or the comments section of websites.

• I enjoy griefing other players in multiplayer games.

• The more beautiful and pure a thing is, the more satisfying it is to corrupt.

And again, doing so was correlated with sadism in its various forms, with psychopathy, and with Machiavellianism. Overall, the authors found that the relationship between sadism and trolling was the strongest, and that indeed, sadists appear to troll because they find it pleasurable. “Both trolls and sadists feel sadistic glee at the distress of others,” they wrote. Sadists just want to have fun, and the Internet is their playground! www.slate.com ___________________________________

Sociopaths have no conscience. They never feel guilt. They don't get sad when someone dies (they may pretend to be sad if the person who died may possibly leave them some kind of inheritance). A sociopaths brain is wired differently to the point where they cannot feel empathy.  Sociopaths are excelled liars. They manipulate, and fool people. The BTK serial killer's arrest shocked nearly everyone who knew him. With very few exceptions (some people saw he had a "dark side" and had the unfortunate oppurtunity to experience it). But for the most part, people saw a kind, charming man. His wife of 34 years had no idea that her husband was a psychopath. After his arrest she divorced him and his kids disowned him. He was arrested in 2005 and is serving life in prison.

Sociopaths cannot be rehabilitated. Sociopaths are born without a conscience, and from a very early age often do horrible things like abuse animals. Brain scans have shown that different regions of their brains light up when they see horrific images

Sociopaths have a psychotic personality, whose behavior is said to be antisocial, but the sociopaths I have dealt with are not anti social, but they blend in and look just like us. They want and need people to think they are "good" people. So they will lie and tell others that they donate to many charity's. Sociopathic mothers will exclaim how "her kids are everything to her, she loves them so much and can't live without them!" even though behind close doors she never pays attention to them, she never does anything that will be beneficial to the child that is healthy. Like maintaining boundaries, having rules they must follow, stucture (that all children need and actually want from a defective parent) The sociopath is screwed all up, so it's not even realistic for one to believe that the sociopathic parent would do what is "right" for her children. REMEMBER THE SOCIOPATH HAS NO MORALS, ETHICS, OR COMMON SENSE – nor do they care to have any.

It's very important to the sociopath to convince you that they can be trusted. They need you trust them because it makes it much easier for them to get what they want out of you, drain you mentally, physically and financially. After they have sucked you dry, they no longer need you anymore. So they discard you like garbage. But not before ripping your life to shreds and leaving you traumatized. The sociopath is gone before you even know what hit you..

Sociopaths do not see other human beings as thinking and feeling, they don’t see anything wrong with this behavior. They are very selfish and do whatever they can to get what they want, so whatever it takes – murder, cheating, lying – they do without any regret.

Sociopaths will never take responsiblity for anythjng.  They do not learn from experience. They Will NEVER change.

Sociopaths like to feel in control. They like to control people they consider lesser and insignificant human beings. They mentally “torture” everyone they think is smarter or better than them. It gives them a sense of victory or achievement, to be able to break someone who is "talented" or "successful" down.

Posted by Sociopaths and Their Path of Destruction at 5:09 AM