When the Sociopath won't Go Away!

The Sociopath is a Toxic individual with no remorse for what they do to others. The most harm is usually to the people they "say" the Love.
The toxic person doesn’t truly care about anyone but themselves — they just want to keep others around to feed on emotionally, and when a person they think should do everything they ask (regardless if they are still in a relationship with them) decide to go NO CONTACT -- they don’t plan on letting that person get away that easily. 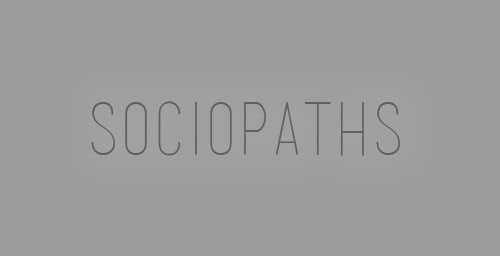 Many female sociopaths have traits of borderline, narcissistic, antisocial or histrionic personality disorder.  People with Dependent Personality Disorder may also resemble a toxic sociopath as well, the difference is the sociopath is truly evil, the dependent person is just needy and afraid to be alone. (Read my other post about when you are the target of a sociopath, they mention many if the tactics the sociopath does to destroy, the dependent disordered person doesn't do these things. I.e. - spreading vicious rumors to destroy your reputation, that is a sociopathic trait only) j
When a sociopath ends a relationship with you, and they still feel that you "owe" them something (usually this is when you share children with them). They will never leave you alone. They always need more money, but no matter how much money you give them, it will never be enough. Sadly even when the children turn into adults, the sociopath will still find reasons to contact you. They pretend it's about your adult children. When in reality they are actually just probably bored... Yes bored... It is pathetic but true..
Sociopaths manipulate to gain control over you and if you have choose to distance yourself from them, they will become desperate to make contact. Below are some of the tactics they may use:
~ Ignoring your requests to stop texting or calling you, pretending as if nothing has happened. When they cheat, they will give you space for a few weeks, then after they think enough time has gone by (to a sociopath, since they have no genuine feelings or emotions, they don't understand that cheating is so hurtful and trust Is so broken, that it can't be fixed with time) so they attempt to continue on as if nothing has changed.
~ Asking you when you’re going to “get over it” and start being normal again.
~ Sending you a Fake Apology to give you hope that things have changed. If you are really done with the sociopath, you will able to see right through this, and won't fall for any apology. Sociopaths usually won't apologize, they may say something like “let's wipe the slate clean for the children's sake” or “we have both done things to hurt each other, let's be civil to one another”. Knowing they are the one who has done 99.99999% of the hurting..
~ Trying to trick you into contact by saying someone needs you, is sick, or in trouble. {sociopaths
love the drama of someone being sick or dying, so when someone really is sick or dying, they use it

to their advantage}. If no one is sick or dying they just make it up.
~ Saying they’re worried about you, concerned about whether you’re okay, need to know where you are, they feel you are not acting normal... They are worried for your safety.
~ Sending unwanted cards, messages and gifts. They will send gifts from your children, as they know you are likely to feel guilty about not taking a gift from your kids. Don’t allow this – exposing your children to manipulation is far worse!
~ Constantly telling that this or that is still at the house you may have shared and they need to come get it back. Never let them back in your home. Make sure anything they left - you return to them. EVERYTHING!
~ Baiting you with drama games. Especially if you share children. Everyday there will be a new problem with the children. Especially as the children get older. They start losing control of the children and you. So they will tell you your child is going through a "tween depression" and it's important for the child to see his parents together and getting alone. Or they will say "Sally failed her driving test and is devastated and crying and has lost all confidence, please be there for your
daughter!" When you call to check on your child, she is not devastated or crying. She didn't even take the driving test yet... Sociopaths will lie about everything. They feel confident you won't confront
them.
~ Contacting you about “important” things they “forgot” and suddenly have to tell you. Those "important" things are usually lies. Remember the sociopath Lies just to Lie. There is no rhyme or reason behind most of their lies. They are just really crazy and messed up.   No one understands why they lie and make up story's when there is nothing to gain from the lie - again they are usually bored....
If you have told someone you do not want contact, and they continue to bother you, that is harassment and the police should be able to help you. They are well-accustomed to dealing with skillful manipulators and have many ways of handling them, so do not hesitate to ask for help. If you ever feel that someone you are trying to break off a relationship with may be capable of more than simply annoying you mildly, make sure you make authorities aware of this person and how they are stalking or harassing you, before the sociopath decides to play victim and talks to your local police first, and tells them lies about you, therefore when you threaten them with calling police, they don't care because they have a plan for that.  (And remember, you have nothing to be ashamed about; you’re not the one behaving badly, and the police are there to protect you from abuse.)

You must Never Under Estimate a Sociopath, do not give them the benefit of the doubt. Once you realize the person you thought you knew, doesn't exist, and the person you have been in a relationship with is a monster, it will be hard to accept. But the sooner you accept it, the safer you will be.
They have no conscience telling them to not do something because it's wrong, they feel no remorse after they have destroyed lives. They are hard wired to manipulate, lie and deceive. Especially empathic people. They believe that if you are sensitive and care, you are weak. And they target the weak and the vulnerable.


Posted by Sociopaths and Their Path of Destruction at 7:08 AM

Email ThisBlogThis!Share to TwitterShare to FacebookShare to Pinterest
Labels: adult bully, harassment, relationship with a sociopath, stalking, what to do if you are a target of a sociopath